Bontac is once again at the forefront of anti-aging innovations. It has completed all production layouts and index tests, and is launching the first batch of NMNH globally.

NMN is still popular, and Bontac NMNH has been launched in the market. 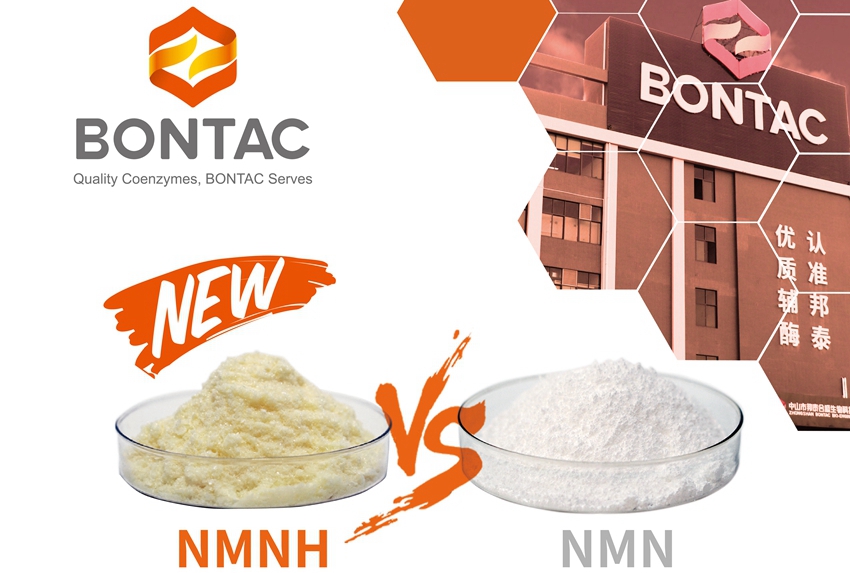 The product name of NMNH is "Reduced Nicotinamide Mononucleotide", which is the reduced form of NMN. The molecular formula of NMNH is C11H17N2O8P. Molecular weight: 336.23 g/mol, CAS No.: 108347-85-9. It is an amorphous yellow powder.

NAD+ is one of the most popular molecules in the field of anti-aging. Scientists have discovered and applied a variety of NAD+ precursors: NA, NAM, NR, NMN. Among them, NMN is considered to be the most suitable NAD+ precursor.

However, a paper entitled "Reduced Nicotinamide Mononucleotide is a New Effective NAD + Precursor in Mammalian Cells and Mice" was published in the journal "FASEB J.", and the researchers reported a new type of the NAD+ supplements, the precursor NMNH, and its anti-aging ability suppresses NMN.

NMNH is more potent than NMN

The answer from this new research in 2021 is yes.  According to the data from Zapata-Pérez et al., when applied to cultured cells, the NMNH is shown to be more efficient than NMN as it was able to “significantly increase NAD+ at a ten times lower concentration (5 µM) than that needed for NMN”.  Moreover, NMNH shows to be more effective, as at 500 µM concentration, it achieved “an almost 10- fold increase in the NAD+ concentration, while NMN was only able to double NAD+ content in these cells, even at 1 mM concentration.”.

Interestingly, NMNH also appears to act quicker and has a longer-lasting effect compared to NMN. According to the authors, NMNH induces a “significant increase in NAD+ levels within 15 minutes”, and “NAD+ steadily increased for up to 6 hours and remained stable for 24 hours, while NMN reached its plateau after only 1 hour, most likely because the NMN recycling pathways to NAD+ had already become saturated.”. Previous studies were carried out in cultured cells (i.e., in vitro). So, does NMNH also work in a real animal?

To address this, researchers performed an IP injection of 250 mg/kg NMN(H) in mice and after 20 hours, a second injection was administered at the same concentration. Strikingly, while blood NAD+ content after NMN supplementation declined to basal levels after just 4 hours, NMNH administration sustained a 2-fold NAD+ increase for at least 20 hours following the first injection. This was also reflected in the blood samples taken 4 hours after the second IP injection, as an increase in NAD+ was only detected in NMNH-treated animals. Moreover, NMNH increased NAD+ levels in a variety of tissues and to a greater extent than NMN, with the most remarkable effects in the liver (>5-fold increase) and kidney (>2-fold increase). NMNH also significantly increased NAD+ content in other tissues, such as the brain, gastrocnemius muscle, brown adipose tissue, and heart, while NMN failed to do so. 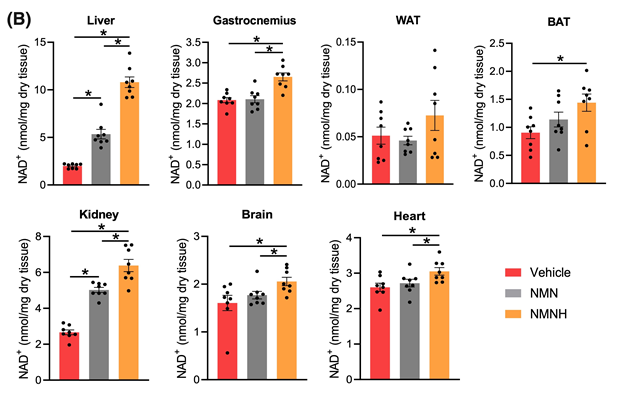 In general, as a new and effective NAD+ precursor, NMNH can increase the NAD+ level in cells and organisms more quickly and effectively, and has potential anti-aging functions. It is expected to become an anti-aging star after NMN. These results demonstrate that NMNH is an efficient NAD+ booster that can increase NAD+ levels to a greater extent than NMN in various tissues. NMNH is established as the second member of the new family of reduced NAD+ precursors, besides NRH. This new data, together with previous findings, indicate that reduced NAD+ precursors can act as very potent NAD+ enhancers and open doors for a new generation of highly efficient NAD+-boosting molecules.

A good news about Bontac NMNH

We sincerely invite you to participate in the Supplyside West Exhibition to be held in Las Vegas, USA on October 25, 2021. We will make the world premiere of NMNH at this exhibition and provide NMNH raw material display. Quality Coenzymes, BONTAC Service. BONTAC welcomes your participation and looks forward to cooperating with you!

1.《Reduced nicotinamide mononucleotide is a new and potent NAD+ precursor in mammalian cells and mice》