As a new star in the anti-aging industry, NMN succeeded in getting out of the circle in a short period of time. More and more people have learned about the effect of NMN, and it has attracted widespread attention from people from all walks of life. Among them, the study of the effects of NMN on biological physiology and its safety considerations is also a hot topic, especially for people who take NMN. Many people mistakenly believe that NMN is a chemical drug. But in fact, NMN is widely present in breast milk and some foods in nature, but the content is low, including our common cabbage, broccoli, cucumber, edamame and so on.

Recently, An article entitled "Safety Evaluation after High-dose Acute and Subchronic Oral Administration of High Purity Nicotine Mononucleotide (NMN) in Sprague-Dawley Rats” was published in the ScienceDirect journal and mainly studied the pathogenicity, heredity, synthesis and mild low-temperature toxicity of high-purity synthetic NMN. Test experiments Under the conditions, the study found that NMN is not spiritual or hereditary. 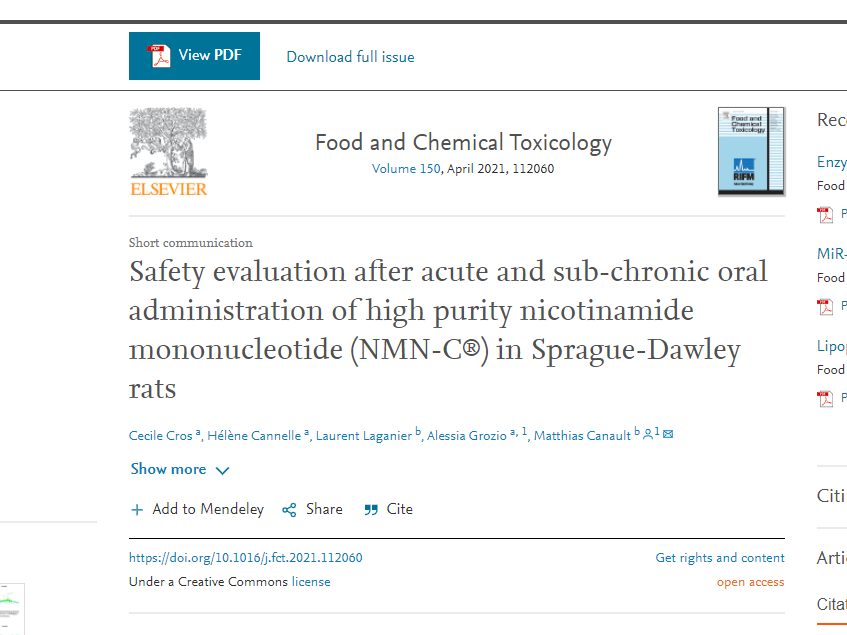 The researchers first conducted an acute toxicity test of NMN. Rats were given oral intake of 2666mg/kg of NMN and then observed for 14 days. The test results show that the weight change, mortality, and clinical signs of rats have not changed significantly, and NMN has no acute toxicity to organisms. Subsequently, the researchers also tested the 90-day subchronic toxicity of NMN. After the rats were given a dose of 375/750/1500 mg/kg/d of NMN for 90 days, followed by a 28-day recovery period, the test results showed that NMN has an effect on weight change, food and water consumption, feed conversion efficiency, and biochemical There is no obvious effect on blood parameters and major organs. NMN has no subchronic toxicity to organisms.

The bacterial reverse mutation test (Ames test) assessed the mutagenic and/or pro-mutagenic potential of NMN-C® in several bacterial strains. The test was performed in accordance with OECD Guideline 471 for the Testing of Chemicals (Bacterial Reverse Mutation Test (Test No. 471, 2020)). Bacterial strains S. typhimurium TA98, TA100, TA1535, TA1537 and E. coli WP2(pKM101) were exposed to NMN-C® at concentrations ranging from 0.06 to 5 mg per plate with and without metabolic activation system (S9 microsomes, Moltox, inc., Boone, NC, USA) under the direct incorporation and the pre-incubation procedures.

The number of revertant colonies per plate was counted and recorded by an automatic colony counter. The Ames test experimental procedure is described in more detail in the Multimedia component 1.

The assay studied the in vitro genotoxicity potential of NMN-C® by detection of micronuclei in cultured mammalian cells, in compliance with OECD guideline 487 (Test No. 487: In Vitro Ma, 2020). Briefly, Chinese Hamster Ovary cells (CHO–K1 cells CCL61, ECACC 85051005 from ATCC, Manassas, VA, USA) were exposed to positive controls or NMN concentrations. Micronucleus frequency was microscopically analyzed in at least 2000 cells (1000 cells per culture, 2 cultures per concentration) for minimum 3 concentrations of NMN-C® (inducing less than 50% of RICC reduction) and controls. The in vitro micronucleus assay experimental procedure is described in more detail in the Multimedia component 1.

Rodents (Test No. 408, 2020). Stock solutions of NMN-C® in distilled water were prepared each week and stored at - 20 ◦C until use for administration or formulation analysis. Formulations were administrated to the animals via oral gavage once daily for a period of 90 consecutive days at concentrations of 375, 750 and 1500 mg/kg in a volume of 10 mL/kg. One hundred Sprague Dawley rats (50 males and 50 females) were distributed into four experimental groups (A to D) separated in two different allocations: main allocation (10 males and 10 females per group) and recovery allocation (5 males and 5 females from the vehicle and high dose treated animals) (Table 1). Animals from Group A were treated with the vehicle and served as control, whereas animals from groups B, C and D were treated with NMN-C® at doses of 375, 750 and 1500 mg/kg, respectively. Safety read-outs included mortality, systemic clinical signs, body weight, body weight gain and food consumption recorded throughout the whole study. In addition, clinical pathology (hematology, blood chemistry and urinalysis) determinations were performed after thirteen weeks in the animals from the main allocation and at the end of the treatment-free recovery period in the animals from the recovery allocation. Furthermore, ophthalmic examinations were performed before starting administrations and at week 13. Assessment of the organ weights and histopathological evaluation completed the study.

Analyses were performed using the Table & Statistics module of Provantis (Instem LSS Ltd., Staffordshire, UK) pre-clinical software. Unpaired t-test and Mann-Whitney test were used to test the normal distribution when comparing two groups. Test of equal variance on these two groups was then performed using unpaired t-test with Welch’s correction. For data analysis of more than two groups, normal distribution was assessed with one-way ANOVA followed by Dunnett’s posttest, for comparison versus the control group. If one-way ANOVA was significant, Dunn’s post-test was performed. A probability value of P < 0.05 was considered significant. Mean and standard deviations were calculated for all quantitative data. Male and female rats were evaluated separately.

We found that the high purity synthetic NMN-C® produced by Seneque SA is not mutagenic, pro-mutagenic, clastogenic nor aneugenic at the tested concentrations. These results are consistent with data obtained for another NAD+ precursor, NR (Conze et al., 2016). Niacin and

niacinamide, both components of vitamin B3 which also enter the NAD+ synthesis pathways, were negative in the Ames test (Cosmetic Ingredient Review Expert Panel, 2005).

However, niacinamide was found to induce large structural chromosome aberrations in vitro on CHO cells at the concentration of 3 mg/mL, which highlights potential different properties and toxicity profiles among the various NAD+ precursors.

No adverse effects were observed after a single oral administration of 2666 mg/kg of NMN-C® in vivo. These results correlate with a recent report of short-term (7 days) repeated administrations of NMN in mice showing that doses of 1340 and 2680 mg/kg/d were well tolerated and led to no deleterious effects for the lower dose and slightly increased level of alanine aminotransferase for the highest dose (You et al., 2020).

Additionally, administration of 1340 mg/d for 7 days in dogs resulted in mild increases in creatinine and uric acid, while other biomarkers remained unchanged. These data highlight the sub-acute safety of NMN. Thus, we have further evaluated safety for a longer period of time in a

During the 90-day sub-chronic administration study, statistically significant differences in several physiological and biochemical parameters were found mainly at the end of the treatment period, in the high dose (group D), and sometimes mid-dose groups (groups B and C) as compared to the untreated control animals. These differences were all of minor magnitudes with no clear dose-dependent relationship.

Furthermore, they were not associated with any clinical signs and/or histopathology findings in examined organs. Therefore, these observations were considered to be not treatment related and/or devoid of toxicological relevance. Organ weight changes relative to control consisted of increases in kidney, liver, and adrenal gland weights, correlating with histopathology findings in the kidney and liver.